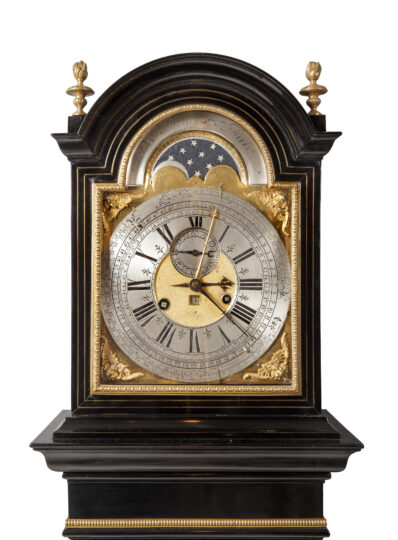 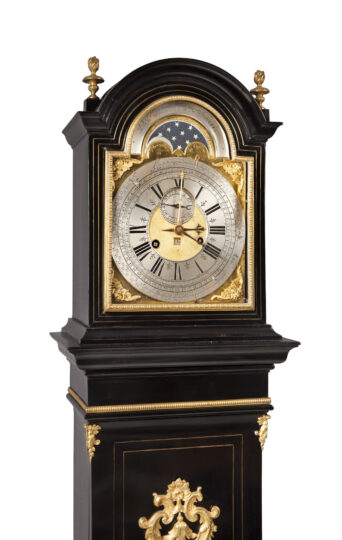 Movement
The eight-day movement is constructed between plates and consists of going and striking trains. The weight-driven going train has anchor escapement with seconds pendulum, whilst the spring-driven striking train, regulated by an external numbered count wheel on the backplate, strikes the hours fully and the half hours with one stroke on a bell, situated on top of the movement. The latter indicates solar time. The backplate is signed by the maker: De Rabours AParis.

Dial
The arched brass dial has a Roman silvered brass chapter ring with half-hour and Arabic minute divisions. The time is indicated by a pair of blued-steel hands and a gilt-brass equation hand, which has a sun emblem. There is a sliding equation ring around the chapter ring, in which the months and the corresponding days are engraved, as well as a minute ring. By turning this ring with a fixed brass hand, it can be positioned on the right date. In this way the equation hand indicates real solar time. Under the XII is a silvered brass seconds ring in the matted centre, the seconds being indicated by a blued-steel hand, whilst there is also a date aperture. The moon phase, Phazes de la Lune, with the corresponding moon date is indicated in the arch, as well as the maker’s engraved signature De Rabours AParis. There are winged-cherub spandrels in the corners.

Case
The ebonised pearwood-veneered oak case has brass line inlays in the front and sides. There are brass mounts on the hood and case to embellish the clock. The circular lenticle in the trunk door has a brass surround, similar to the one around the dial. The base of the clock is brass-clad and rests on four brass feet.

Note
Equation is the term used for the difference between true solar time (the time indicated by a sundial) and mean time as indicated on a clock. Solar time and mean time only coincide four times a year (calendar for which every day is invariably 24 hours long). This happens on the following dates: 15 April, 15 June, 31 August and 24 December. It was Christiaan Huygens (1629-1695) who was the first to mention a clock which he invented that indicated solar time without using an equation table. This reference occurs in the last known letter to his brother Constantijn in the year 1695. Henry Sully (1680-1728), Joseph Williamson (1686-1725) or Henry Enderlin are supposed to be the inventors of the mechanism which drives two independent hands indicating mean and solar time. Some clocks have a linear indication of the deviation of the two times, which is set by hand, as is the case with the present clock. In other cases, a separate hand indicates automatically how much solar time differs from mean time. Most clockmakers chose for a construction with the two hands operating from the same point on the dial. Most of these clocks or watches with time equation were made in the 18th and 19th centuries, mainly in England and France. There were also clocks which had printed tables stuck to the inside of the case showing the equation of time.