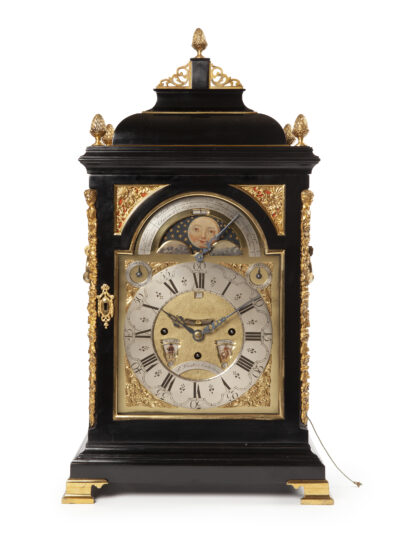 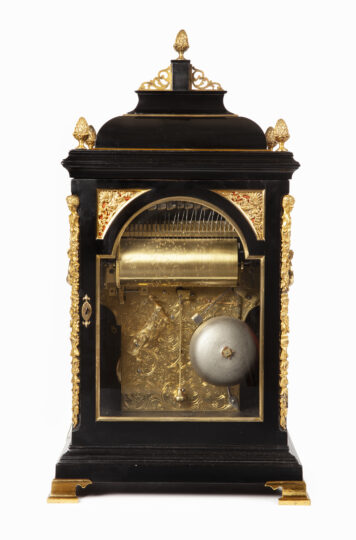 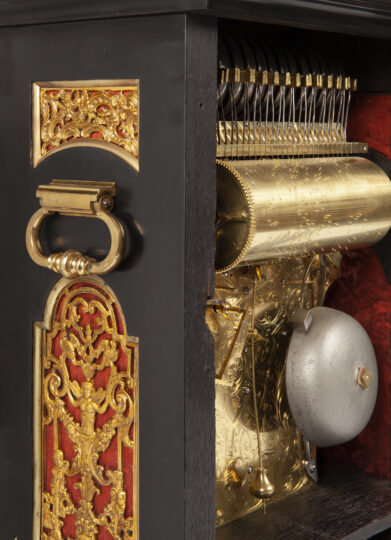 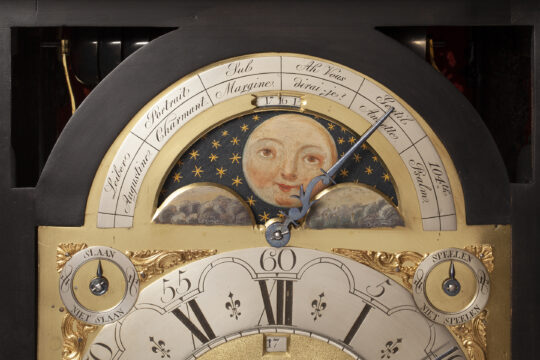 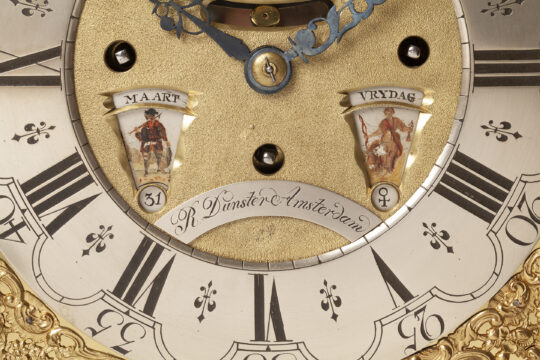 Movement
The spring-driven triple fusee eight-day brass movement has going, striking and musical trains. The going train has a verge escapement and a short pendulum. The ‘Dutch striking’ indicates the hours and the half hours fully on two bells differing in pitch. The musical train has 13 bells with 25 hammers, playing one of six tunes on the hour, followed by the hour strike. There is a blued-steel tune selector in the arch of the dial. The last tune played can be repeated on demand by pulling a cord. The backplate is elaborately engraved, depicting scrolling leaf motifs.

Dial
The arched brass dial has a silvered chapter ring with Roman hour numerals, with half-hour (lily motif), quarter-hour, half quarter-hour (lozenge), Arabic five-minute and minute divisions with the typically Dutch arches. The time is indicated by a pair of pierced blued-steel hands. Under the XII is a date aperture, under which there is a shaped false pendulum aperture in the matted centre. In the top corners are two subsidiary dials with blued steel hands, left slaan/niet slaan (strike/silent), with which the striking can be switch on or off and right speelen/niet speelen (chime/not chime) to switch the musical train on or off. There are spandrels in the corners, the top ones specially shaped to accommodate the subsidiary rings. In the arch is a moon aperture with a moon disc showing the phases of the moon and, in a separate aperture, the age of the moon in Arabic numerals. Around this aperture is a silvered band in which the six tunes of the musical train are engraved:

Below the middle there are two triangular apertures, that on the left showing the month, a symbolic representation of the month and the number of days in this month, that on the right showing the day, the deity of the day and a symbol representing this day. The maker has signed the dial on a shaped silvered plaque below the central winding hole: Dunster Amsterdam.

Case
The ebonised pearwood veneered oak case has a so-called inverted bell-top, embellished on the front by a rococo brass ornament. The front door has an arched glazed window in a brass surround. The sound frets in the top corners have pierced brass ornaments. On either side of the door caryatids are mounted on the chamfered corners. The door at the back is also arched. There are brass carrying handles to both sides, as well as pierced brass sound frets in brass frames. The top is embellished by four brass pineapple finials on the corners, whilst the inverted bell-top is surmounted by a fifth similar finial on a base supported on both sides by pierced wooden ornaments. The moulded base rests on four brass ogee feet.

The maker
Roger Dunster (c. 1695-1747) was a watch and clockmaker in both London and Amsterdam. In 1722 he became partner of Christopher Clarke, who was also in Amsterdam, under the name of ‘Clarke and Dunster’. Clarke (1668-1734) had worked with Ahasuerus (II) Fromanteel, the name of the company being Fromanteel & Clarke, in Amsterdam around 1694. Fromanteel died in 1703 but Chr. Clarke kept using the name of the firm until 1722 when Dunster joined. This partnership lasted until 1730, when Christopher Clarke returned to London. Roger Dunster continued the clockmaker’s busines, this time under his own name. In 1744 he bought a house on Vijgendam in Amsterdam. After his death in 1747 ‘Master Clockmaker Abraham Bruykens’ took over the business. 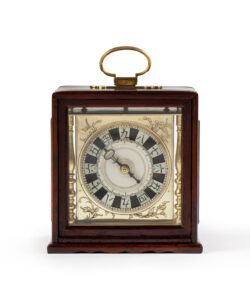 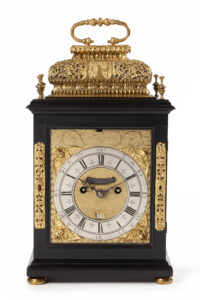 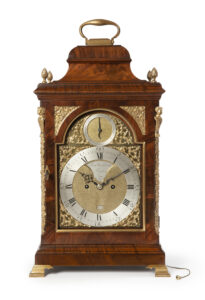