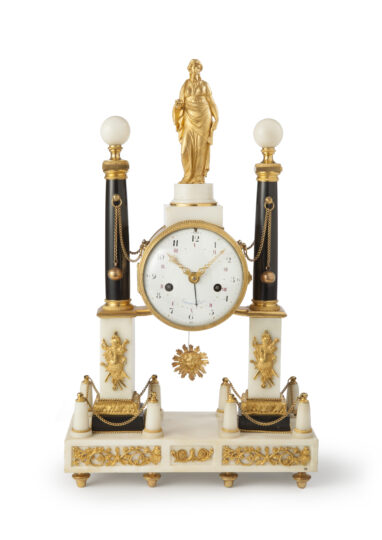 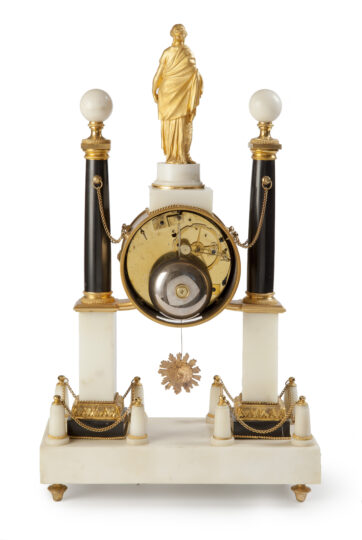 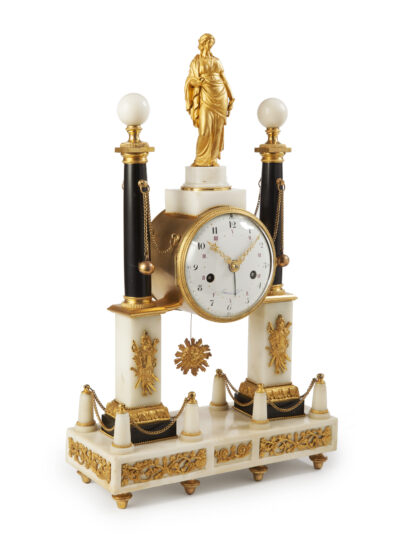 Movement
The eight-day spring-driven movement of this Directoire mantel clock is constructed between circular plates, has anchor escapement and a silk-suspended pendulum with a sunburst pendulum bob, has bell striking, which is controlled by an external countwheel. It strikes the hours fully and the half hours with a single stroke. The countwheel is numbered to indicate the position of the striking train.

Dial
The convex enamel dial has black Arabic hour numerals with Arabic quarter-hour, five-minute and minute divisions. In addition it has Arabic decimal hour divisions in red on the inner ring. The clock is signed by the maker below the middle of the dial: Laurant à Paris. The time is indicated by a fine pair of symmetrically pierced gilt-brass hands, whilst the decimal time is indicated by a blued-steel pointer. With the decimal system the day is divided into ten hours. This means that at noon the decimal time is 5 o’clock. Above the 12 is a regulation arbor which controls the length of the silk suspension wire of the pendulum. The enameller has signed the dial along the rim at the bottom: Coteau. The dial is protected by a convex glass set in an engine-turned gilt-brass bezel with a pearl string.

Case
The white marble case of this Directoire mantel clock has a rectangular base with recesses all around the front and the sides, embellished by pierced gilt cast-brass ornaments. The movement is situated between two gilt-brass capped black-marble pillars on high square white-marble bases. Each pillar is surrounded by four bollards, connected by gilt-brass chains. The fronts of the marble bases are embellished by gilt-brass ornaments depicting military attributes held together by a ribbon. Between the movement and the black pillars are gilt-brass chain swags, on the front with a free hanging part ending in a gilt-brass ball. Both pillars are surmounted by white-marble balls, whilst the movement is surmounted by a gilt-brass female figure on a white-marble base. In one hand she holds a heart and in the other a leafy vine. The whole rests on eight gilt-brass toupie feet.

Literature:
Tardy, Dictionnaire des Horlogers Français, Paris, 1971, pp. 352 and 141
The maker
Laurent (also Laurant) was involved in problem-solving concerning decimal time. He was famous for making clocks with the decimal system. There is a decimal clock by his hand in the Musée Carnavalet in Paris, signed Laurent à Paris

The enameller
Joseph Coteau (1740-1812) had his workshop in the Rue Poupée in Paris. He was one of the great enamellers of his day and specialised in making dials, though other work is also known.

The French revolution had turned France into a secular state, which rebelled against everything which had to do with the Church, including the Gregorian calendar. The French republican calendar, designed by Romme and Fabre d’Églantine, was implemented during the French Revolution and is also called the French revolutionary calendar and Jacobin calendar. It was the official calendar from 5 October 1793 until 1 January 1806, whilst sporadically being used during the commune of Paris in 1871.

In the wake of the occupation of the Southern Netherlands by France in 1794, the Republican calendar was also introduced in this part of the country to be used by the Registry Office from 17 June 1796, and generally compulsory from 3 April 1798. On 10 Nivôse of the year XIV (31 December 1805) the system was abolished. On 1 January 1806 the Gregorian calendar came into force again.

The French revolutionary calendar was also a reflection of the technocratic way of thinking, which wanted to make a clear break with the past. A decimal calendar led to the decree of 4 Frimaire of the year II (24 November 1793) introducing the decimal time system. Ten hours of 100 minutes each, divided into 100 seconds would from then on determine the rhythm of the day. Because there were no whole numbers at the quarter hours (being 2.5 and 7.5 respectively) the system was not really welcomed, the more so as time was used to indicate a point in time rather than duration of time. This meant that the decimal system was not a real improvement. In practice it was not really used. In addition, the clocks were complicated as it was felt desirable to indicate the old time too. There was only a small production of decimal clocks, which makes them extremely rare.

The week was replaced by the decade, a period of ten days. This meant there was only one free day every ten days instead of one in seven, which did not really enhance acceptability of the system. The corresponding decimal system of weights and measures was more successful. Though it too was abolished again for some time it conquered a large part of the world; in science entirely. 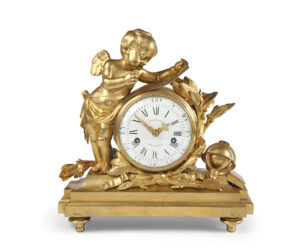 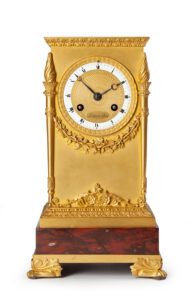 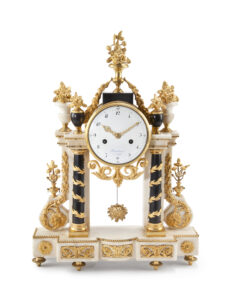