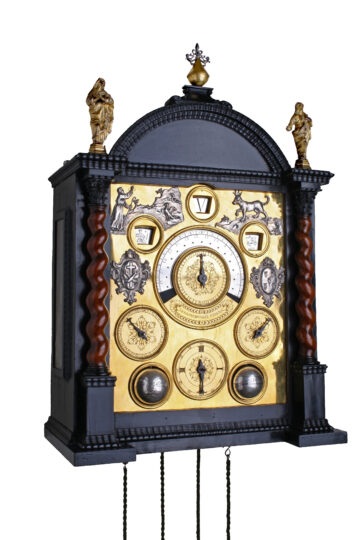 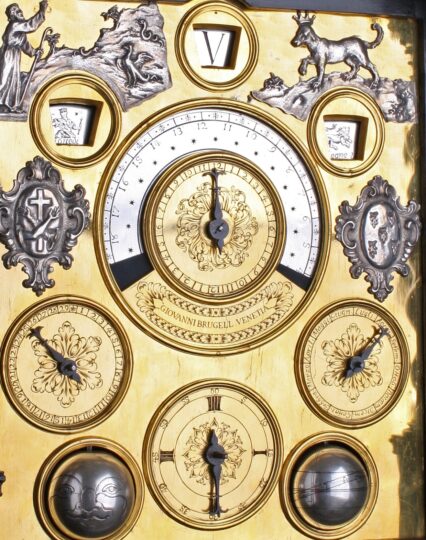 Dial
The impressive gilt-brass dial has several indications and symbols. The centre dial indicates the hours in a scale of twice 12 hours. The centre dial is surrounded by a rotating silvered chapter ring with 24 hour Arabic indication. The black parts are shutters and moving with the time. The part of the dial still visible is the period between sunrise and sunset. Therefore, in wintertime more black is shown than in summertime. As the engraved sun on the silvered disc is on top, the blued steel hour hand indicates 12 o’clock on the dial. The large Roman numeral on top is a hour indicator and jumps over at the hour. On the left side the day of the week and its personification are indicated. On the right side the month of the year is shown. On the left lower side the moon is turning and indicates the phase of the moon and the moon date. The turning ball on the right side indicates the position of the Zodiac during the year. The dial is decorated with four silver plaques, on the left Saint Francis of Assisi with the animals: on the right side the Wolf of Gubbio and two medallions with signs of the crucifixion and the crucifixion wounds of Christ referring to the stigmata of St. Francis.

Brugel(l):
Circa 1700 Giovanni Adamo Brugel(l) was working in Venice. He is from a clockmaker family which originates from Würzberg, Germany.

Francis of Assisi / St. Francis:
Saint Francis of Assisi (Giovanni Francesco Bernardone; born 1181/1182 – October 3, 1226) was a Catholic deacon and the founder of the Order of Friars Minor, more commonly known as the Franciscans. He is known as the patron saint of animals, the environment and Italy, and it is customary for Catholic churches to hold ceremonies honoring animals around his feast day of 4 October.

St. Francis and the wolf of Gubbio:
Perhaps the most famous story of St. Francis is when he tamed the wolf that was terrorizing the people of Gubbio. While Francis was staying in that town he learned of a wolf so ravenous that it was not only killing and eating animals, but people, too. The people took up arms and went after it, but those who encountered the wolf were killed. The villagers became afraid to leave the city walls. Francis took pity on the people and the wolf as well and decided to go out and meet the wolf. Francis made the Sign of the Cross toward the wolf who immediately slowed down and closed its mouth. Then Francis called out to the wolf: “Come to me, Brother Wolf. I wish you no harm.” St. Francis explained to the wolf that he had been terrorizing the people, killing not only other animals, but humans as well. “Brother Wolf,” said Francis, “I want to make peace between you and the people of Gubbio. They will harm you no more and you must no longer harm them. All past wrongs are to be forgiven.” Then to the absolute surprise of the gathering crowd, Francis asked the wolf to make a pledge. As St. Francis extended his hand to receive the pledge, so the wolf extended its front paw and placed it into the saint’s hand. Then Francis invited the wolf to follow him into town to make a peace pact with the townspeople. The townspeople promised in a loud voice to feed the wolf. Then Francis asked the wolf if he would live in peace under those terms. He bowed his head and twisted his body in a way that convinced everyone he accepted the pact. Then once again the wolf placed its paw in Francis’ hand as a sign of the pact. From that day on the people kept the pact they had made. The wolf lived for two years among the townspeople, going from door to door for food. It hurt no one and no one hurt it. When the wolf finally died of old age, the people of Gubbio were sad. The wolf’s peaceful ways had been a living reminder to them of the wonders, patience, virtues and holiness of St. Francis. 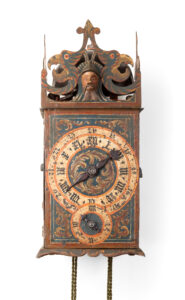 M&R129 LANTERN CLOCK Circa 1840 Japan Movement The weight-driven movement is constructed between vertical bars and consists of going, striking… 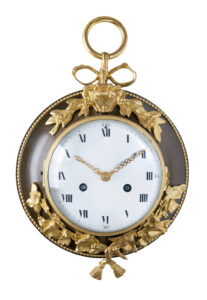