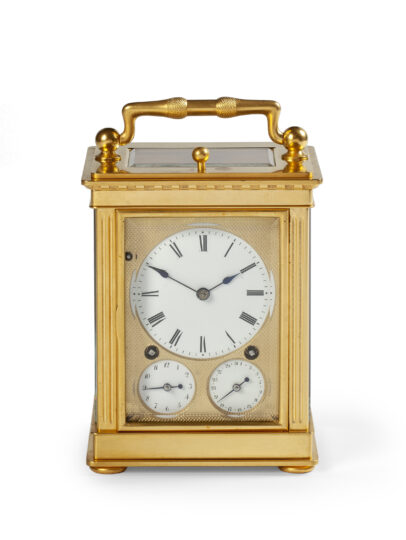 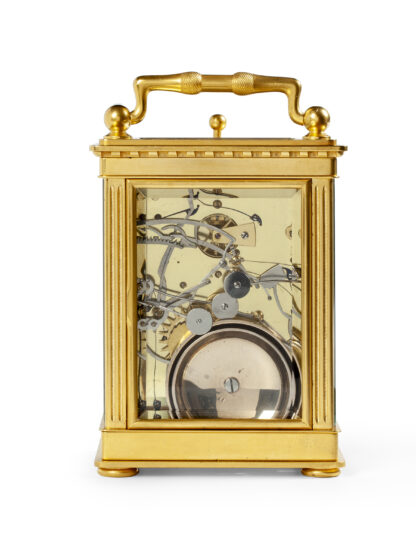 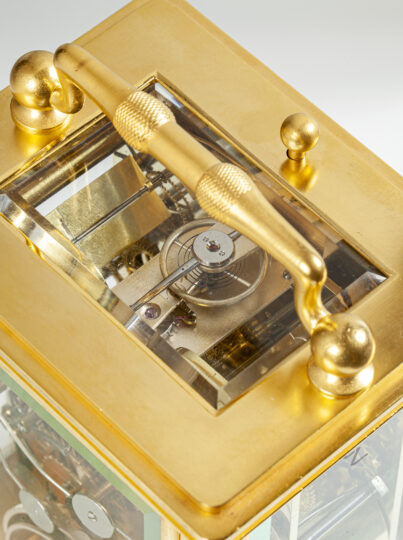 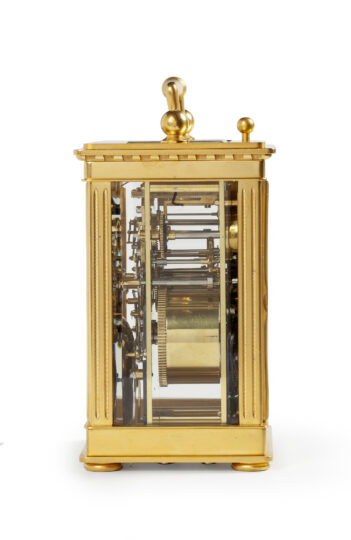 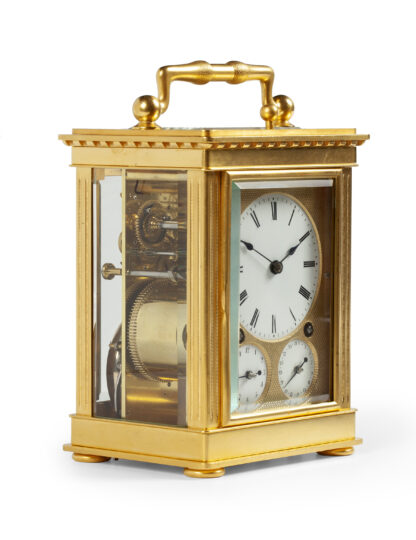 Movement
The brass plated movement consist of going and quarter-striking trains, as well as alarm. The going train has Swiss lever escapement, hairspring balance and regulation. It has grande sonnerie, every quarter hour indicating the quarters on two bells, followed by the hours on one bell. In addition it has repetition. An unusual aspect of the striking is that between 23 and 8 o’clock it automatically switches to non-strike.

Dial
The rectangular engine-turned gilt brass dial plate has three apertures for three white enamel chapter rings. The largest at the top has Roman hour numerals with five-minute and minute divisions. The time is indicated by a pair of blued steel hands. The smaller chapter ring on the right indicates the date whilst the one of the left shows the alarm time. Both rings have Arabic numerals and a small straight blued steel hand. The winding holes are in the dial plate.

Case
The firegilt brass case has bevelled glass panels on all sides so that the movement is almost entirely visible. The top also has a bevelled glass window through which the escapement and regulation are visible. In front of this window is the repetition button, whilst the whole is surmounted by a finely cast carrying handle. There is a door at the back through which the backplate is visible, including the bells, the hammers and the arbors for setting the hands. The case is numbered at the bottom: 1849.

The maker
The great similarity between the present clocks and those described in the books mentioned above justify an attribution to Frédéric-Alexander Courvoisier. He was commonly called Fritz. It has the same quality and similar features of the other complex clocks and can be considered one of the few early Swiss carriage clocks. The number of nineteenth century carriage clocks is relatively small, the greater part being produced in or around La Chaux-de-Fonds, mainly by the Courvoisier family. Fritz Courvoisier (1799-1854) was the second son of Louis (1758-1832) who together with Josué Robert had founded the firm J. Robert et Fils, Courvoisier et Cie. After several changes the company became known as Courvoisier et Cie, from 1811 to 1845. Fritz was trained at the school of horology in the canton of Neuchâtel, managed by Henri-Louis Maillardet and Charles Frédéric Klentschi. Later he travelled extensively as the representative of the family business. Three years after he was married in 1826 he was involved is serious local political problems. He rose to the rank of lieutenant-colonel in 1831 and was temporarily expelled from the canton. After his father’s death in 1832 he and his brothers Henri-Louis and Philippe-Auguste re-established the firm Couvoisier et Cie. He left the family business in 1842 to found his own company and specialised in the sales of watches. 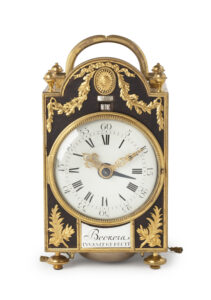 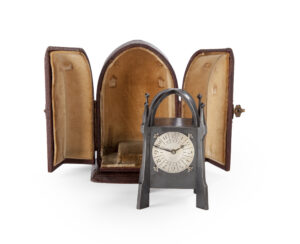 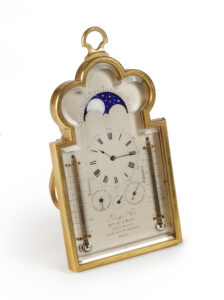