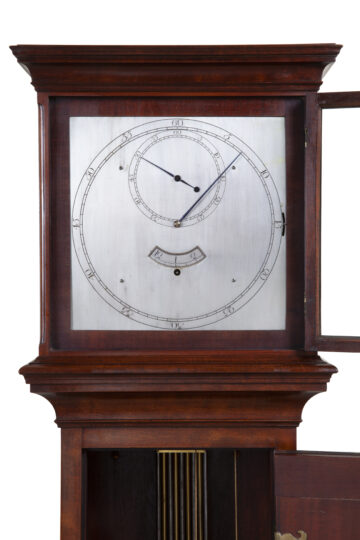 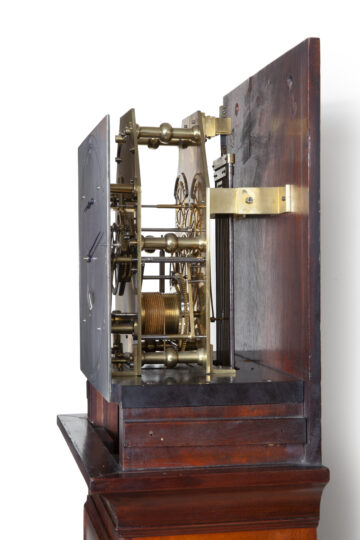 Movement
The weight-driven movement is constructed between latched brass plates, the upper corners chamfered and with mounting brackets to the back plate. It has going train only with dead-beat escapement and a gridiron compensation pendulum above a silvered beat scale to assess the amplitude of the pendulum. The rating nut is graduated. In addition, the movement has bolt-and-shutter maintaining power operated by a lever on the dial near the 15, which keeps the clock going when being wound. The inside of the back cock is stamped SHELTON on each side.

Dial
The square silvered brass dial has an outer chapter divided by Arabic numerals. The hours are shown in an hour aperture below the middle of the dial, whilst the seconds are indicated in the upper half of the centre. The blued-steel central sweep blued steel minute hand indicates the minutes, the seconds being indicated by a counterpoised seconds hand.

Case
The solid mahogany case is well-proportioned. The moulded trunk door gives access to the weight and the pendulum. The plinth and the sides of the hood are panelled. The silvered beat scale inside the case is divided as follows 2-1-0-1-2.

The maker
JOHN SHELTON, CLOCKMAKER OF LONDON – MAKING HISTORY TICK
BY CAROLYN MCDOWALL OCTOBER 21, 2013
On orders from King George III, the explorer, navigator, cartographer and naval officer Lieutenant James Cook(1728-1779) sailed out of Portsmouth harbour in England on 12th August 1768 on his way to the island of Tahiti in the South Pacific. Lt. James Cook had been appointed to command the vessel Endeavour and he was given the responsibility of observing and recording an astronomically important event, the Transit of Venus.
John Shelton, London: A Fine and Rare George III Mahogany Longcase Regulator, stamped Shelton once on the front plate and twice on the inner surface of the back cock – loan arranged by Martyn Cook Antiques, Sydney
This is when the planet Venus passes directly between the sun and the earth and becomes visible as a small black disc moving across the face of the Sun. The transit is a rare phenomenon, which occurs only in a pattern that repeats itself every 243 years. Transits are usually eight years apart and they can be separated by very long gaps of up to 121.5 years or 105.5 years. On board the good ship Endeavour with Lieutenant James Cook was a Shelton Regulator, which is a particularly accurate long-case clock with a specialized dial. It was to be used for timing observations of the event and was made by a brilliant clockmaker of the day, John Shelton of Shoe Lane, London. Recording facts and events in writing is not always what makes history ‘tick’, sometimes it seems it could also be a clock. John Shelton is known to have made five (5) examples of his so-called regulator clock. One of which went with Captain Cook on the recommendation of the Astronomer Royal, Fellow of the Royal Society and member of the Board of Longitude Dr. Nevil Maskelyne (1732-1811). He had been part of the voyage to the island of St Helena in 1761 to measure the Transit of Venus of that year for himself and advised the Admiralty on the types of scientific instruments required for the transit Cook was sent to measure.
John Shelton’s Regulator Clocks were used in the 1760’s and 1770’s, and two clocks accompanied James Cook on his subsequent voyages to the South Seas. They were also used in the West Indies, Hudson Bay Canada, North Cape, Norway and Cornwall in England. Incredibly, they were still being used in 1955. This highly important sister clock by John Shelton was put on view as part of the exciting landmark exhibition Mapping Our World, which is held at National Library in Canberra in the summer of 2013-2014. Martyn Cook Antiques at Sydney arranged the loan on behalf of the current owner.
Replica of portable observatory from Lieutenant James Cook’s observation of The Transit of Venus courtesy National Maritime Museum, Greenwich
During the voyage the clock was cleaned regularly to keep it in perfect working order. Enclosed in a plain but sturdy mahogany timber case, Shelton ensured the bolt and shutter mechanism of his clocks were always maintained in working order. He used a special gridiron and brass pendulum that took full advantage of the different rates of the expansion of metals so that it would remain accurate. This meant in practical terms, the length of the pendulum would remain constant, despite the temperature where the clock was set up to take measurements. It was particularly important because they were going to be in the tropics. Astronomer Charles Green and botanist Joseph Banks went with Lieutenant James Cook on his amazing voyage to observe the transit in the Pacific Ocean. They were determining the Sun’s distance from the earth. Regulators were so very accurate that they could time the transit to the exact second. 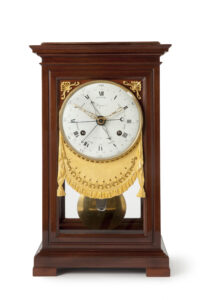