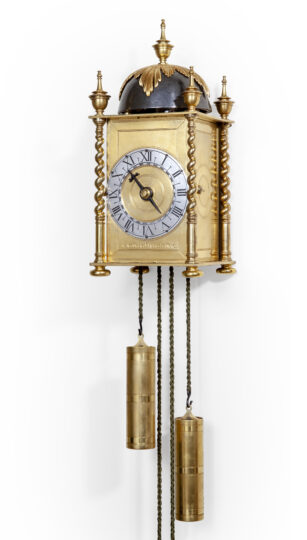 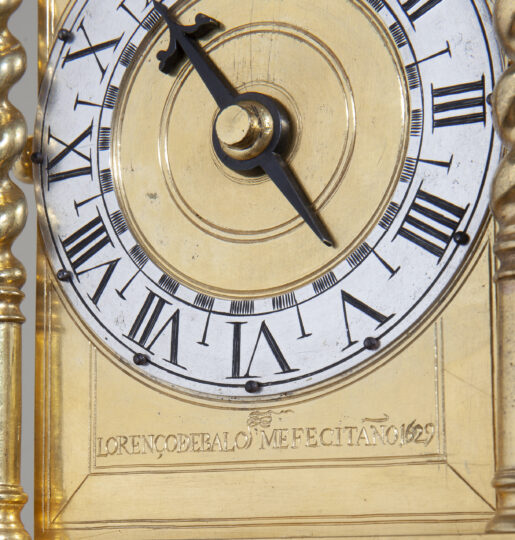 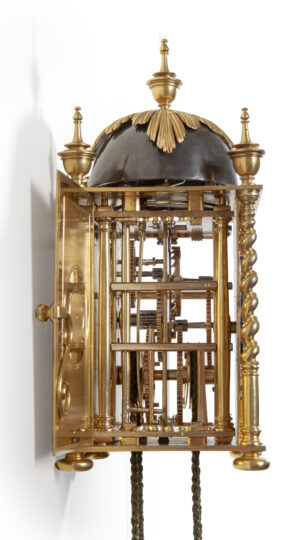 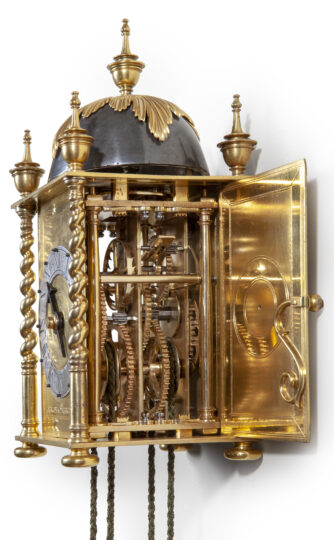 Movement
The weight-driven movement is constructed between vertical bars and has a vertical verge escapement with balance wheel, situated between two top plates. This type of escapement is one of the earliest in mechanical clocks. In addition, the movement has a striking train controlled by a count wheel, indicating the hours fully on the bell, whilst the half hours are indicated by one stroke in passing.

Dial
The austere engravings on the fire-gilt dial make the silvered chapter ring stand out. It is flanked by the attractive twist columns. The Roman chapter ring has half-hour markings, as well as quarter-hour divisions in a ring with shaded blocks. The time is indicated by a single blued-steel hand. The maker has signed and dated the dial prominently below the chapter ring: LORENÇO DE EBALO ME FECIT AÑO 1629.

Case
The fire-gilt brass case is an eye catcher of the first order, mainly because of its characteristic shape and decorations. The barley-twist columns, with their shaped capitals and pillar-shaped bases, in combination with the bun-shaped drop finials suggest movement. The four turned finials accentuate the four corners. The case is surmounted by a bell – adorned by a top finial on an acanthus-leaf ornament. The doors to the sides, which give access to the movement, are embellished by engraved circles. The geometrical line engravings and polished areas on both doors, case and weights define its appearance. The harmonic proportions of all the parts follow the beauty ideal of the early Renaissance.

Son of a celebrated clockmaker
Lorenzo de Evalo spent his childhood surrounded by unusual clocks at the end of the seventeenth century. Indeed, his father, Hans de Evalo, was one of the most important clockmakers of his day in Spain. Originally Hans de Evalo was from Brussels – the capital of Flanders – one of the most important regions in the Burgundian Netherlands. Flemish clockmakers were well-known for their outstanding skills in clockmaking and their contribution to the development of clocks from as early as the
beginning of the fourteenth century. Around 1300 they were making iron turret clocks, commissioned by towns, monasteries and churches. In this way towns and cities competed with each other: the larger and better the clock was, the higher their status. This competition stimulated Flemish clockmakers to develop more and more complicated movements. This did not go by unnoticed. From all over Europe the clergy, the nobility, kings and queens ordered clocks to be made. Charles V – king of Spain and emperor of the Holy Roman Empire – regularly stayed in his palace in Brussels, where Flemish clockmakers made the most exclusive clocks for him. Hans de Evalo followed his famous predecessors in their footsteps and in 1556 he entered the service of Charles V and emigrated to Spain. After Charles V’s death in 1558 Hans de Evalo began to make clocks for Philips II, Charles’s son and successor. Two years later the clockmaker from Brussels was appointed clockmaker of the Palace. He died in 1598. His apprentice Jennin de Cocquart took over the position of clockmaker of the Palace. De Cocquart also became Lorenzo de Evalo’s master. Lorenzo wrote in a letter, dated June 1621, that his father was in the service of the Spanish Royal court from 1556 to 1598.

A Turmuhr as a diplomatic gift
In the sixteenth and seventeenth centuries clocks also served as diplomatic or promotion gifts. A very special and striking example is a Turmuhr signed and dated HANS DE EVALO ME FECIT EN MADRID A 1581. The governor of New Spain – Mexico ruled by the Spanish – gave this clock to the Japanese ruler, Shogun Ieyasu. This was a token of gratitude after the Japanese inhabitants of the town of Onjuku saved more than 300 Europeans from drowning after they had been shipwrecked off the coast of Chiba. Shogun Ieyasu did not only take care of the Europeans, he also arranged their return by boat to New Spain. The Turmuhr which was given is regarded to be the first mechanical clock in Japan. The clock has been ascribed to the Brussels clockmaker Nicolas van Troestenbergh in 1573 on the basis of X-ray imaging research. It is likely that the governor had the signature changed into that of Hans de Evalo, as a clock made by the hand of the clockmaker of the king was more important.

Why is this Wandturmuhr by Lorenzo de Evalo so rare? From the middle of the sixteenth century clockmakers in Germany, France and Italy made firegilt clocks such as Türmchen-, Tisch- and Automatenuhren. The centre of Renaissance clockmaking was situated in and around Nuremberg and Augsburg. There are no Spanish clockmakers known in this period and consequently no Spanish clocks. Clock lover emperor Charles V invited the prominent clockmaker Hans de Evalo and his family to travel along to Spain to work at the court. In the seventeenth century Lorenzo de Evalo succeeded his father as clockmaker in Madrid. 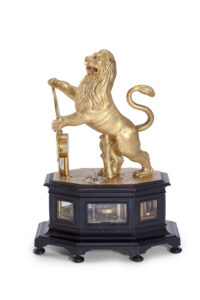 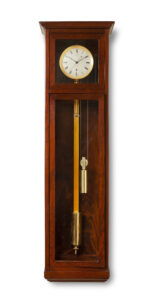 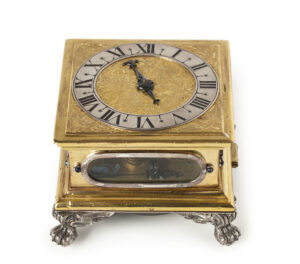