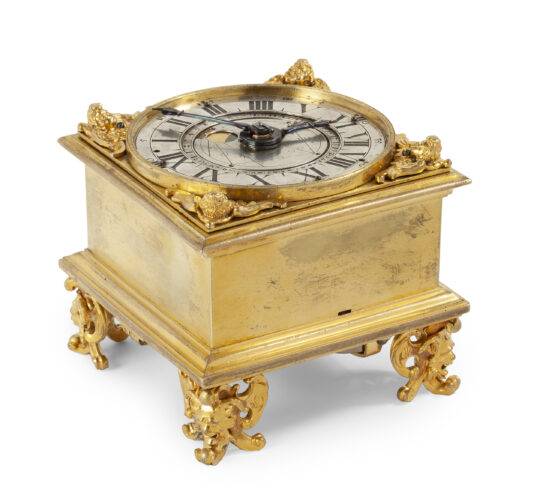 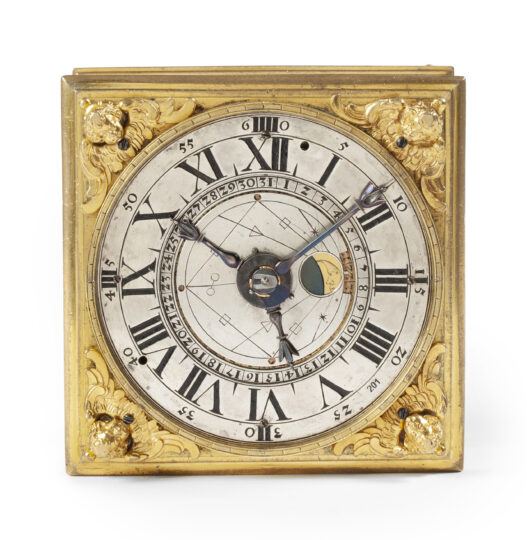 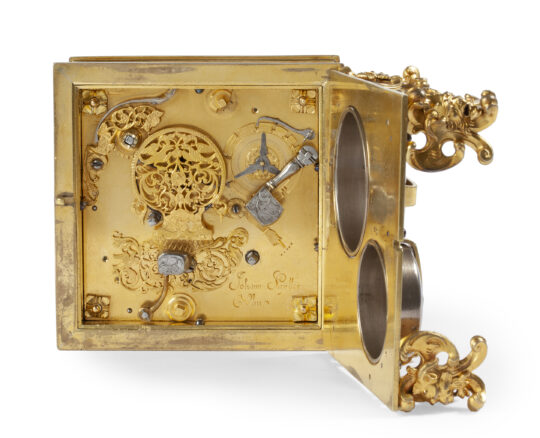 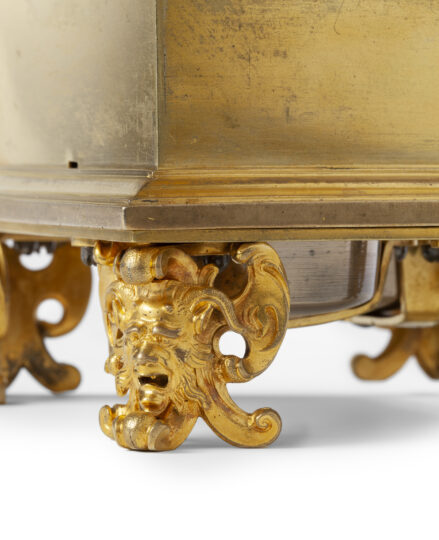 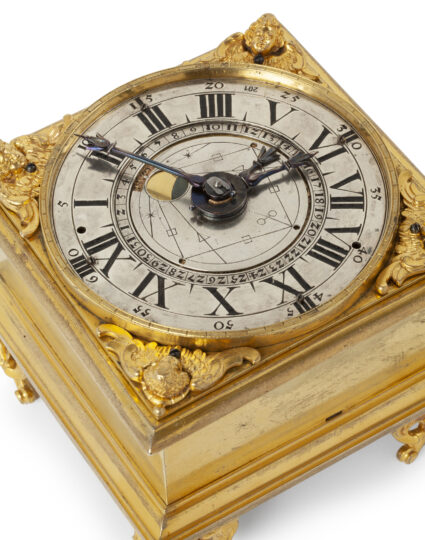 Movement
The quarter striking spring-driven fire gilt brass movement consists of going and striking trains. The going train has a chain fusee, and a verge escapement with balance under a richly pierced and engraved balance cock, depicting floral motifs around a bird. The hour striking is regulated by a count wheel with Arabic hour numerals and indicates the hours on a larger bell while the quarter striking train indicates the quarter hours on a smaller bell. The maker has signed the movement on the backplate Johann Sayller, Ulm.

Dial
The square fire gilt brass dial has a silver chapter ring with Roman hour numerals and half hour markers. The outer track has Roman quarter hour numerals and Arabic five minute divisions. The date is shown on an inner Arabic ring. The time is indicated by a pair of blued steel hands with a tulip motif. The blued steel date pointer has a similar shape. There is a silver disc in the middle with two apertures showing the phases of the moon together with the corresponding moon date. In the middle of this disc is an engraved aspectogram. There is a gilt brass bezel around the chapter ring with a minute track. The corners are embellished by four cherub-head spandrels. Near the XII and the VIII are small holes, through which if necessary the striking can be synchronised with the time indication again with a pin.

Case
The firegilt brass square case has mouldings at the top and the bottom. The bell are mounted in the lid at the bottom which is secured by a latch. The case rests on four firegilt brass feet, each adorned by a ram’s head and volutes.

Aspects
Aspects are the angles between the various elements in the horoscope (the sun, moon and planets).

The maker
Johann Sayller was born in Angelberg in the diocese of Freising, Lower Bavaria on 7 June 1597 and was one of the most renowned makers of complicated watches and clocks in the 17th century. Johann Sayller established himself in Ulm in 1617 and became citizen in 1624; he was married on 6 July 1624. Sayller created his masterpiece in 1626: a rolling ball clock, which was first exhibited in the town hall of Ulm and later from 1812 in the private library of King Frederick I of Württemberg. In 1646 he became master of the guild. Sayller’s clocks were so superior and sought after that usually they were purchased as presents for important or famous people. He made costly hanging watches, complicated astronomical table clocks and other technically ingenious objects. Two of his rolling ball clocks and a silver astronomical vertical table clock (tabernacle clock) of three months duration are in the Württembergisches Landesmuseum. Other table clocks by Sayller can be found in museum collections around the world, such as the National Museum in Copenhagen, the Art History Museum in Vienna and the Los Angeles County Museum of Art. 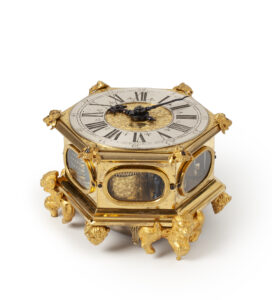 M&R205 TISCHUHR hexagonal Signed: A. Will Thorn Circa 1710 Germany Movement The spring-driven, day-going movement of this richly embellished hexagonal… 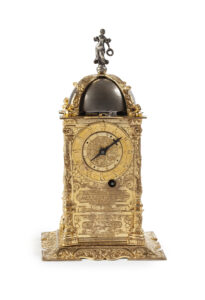 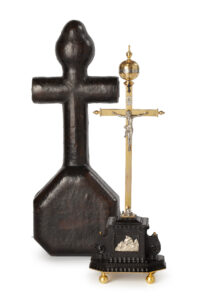